Friends of Wool Station have published a helpful BUS MAP which summarises the various bus routes serving our community this summer. You can view the map on the link below.

Summer bus services will begin running this year from the last weekend in May. moreBus from 28th May and First Bus from 29th. As last summer, there will be four bus services running 7 days/week in our area: moreBus’s Purbeck Breezer 30 & 31, and First Bus’s Jurassic Coaster X52 & X54.

Breezer 30: will run between Weymouth and Swanage via Winfrith, Durdle Door, Lulworth Cove, Wool and Wareham as last year. This summer, the route will include Wareham Station and there will be an additional early-evening journey back to Swanage.

Breezer 31: will not run to/from Wareham this year – instead, it will run hourly in an anti-clockwise circle from Wool Station via Winfrith, Durdle Door and Lulworth Cove then back to Wool, filling in gaps in the “30” timetable.

Jurassic Coaster X52: will run from Weymouth via Winfrith, Durdle Door, Lulworth Cove and Wool, then on to the Tank Museum and Monkey World as last year. It should be an open top bus!

South Western Railway: From 15 May, the railway service between Weymouth and Waterloo returns to near normal on weekdays and Saturdays, with two trains per hour through south Dorset (Mon-Sat) one stopping at Wool and Wareham and the other stopping at Wareham only. The Sunday service will remain hourly.

Please see below current Road-Closure Notices that will affect the routes around our parish.

12th until 17th September – A352 from PORTWAY to KITCHELLS COPPICE: 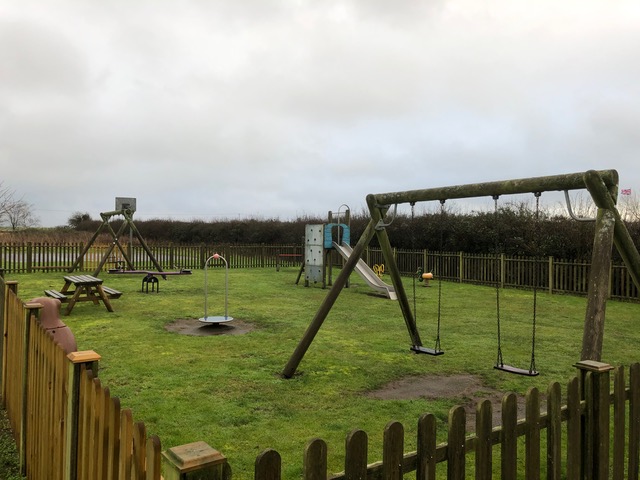 The Recreation Field and Children's Playground

We are looking at the Recreation Field as a whole and debating how to improve it. At present, we have a fairly conventional facility – Football and Cricket pitches and a playground.

The playground was financed by the Parish Council and we are responsible for its maintenance. It’s getting old and tired (installed in 2007) and we are planning to replace it – which could cost £50,000 or more. Before we can do that, we need to know what people want – especially the children who will play on it.

The results of the survey can be viewed in the document below.

We are seeking volunteers to help us to clean and treat the Playground’s woodwork, as much of it is covered in lichen and in a poor state. Whilst we work to replace the playground, we want to keep what we’ve got in safe working order for as long as possible. We’re already waiting for a new support for the baby swings, before we can bring them back into use. If you are handy and both willing and able to spare the time to help clean the woodwork and treat it, please get in touch. Even better – do you also have battery-powered tools / scrapers / paint brushes / ladders etc?

The work is being coordinated by Cllr Andrew Muir. If you can help, please contact him direct by email: cllramuir@wnek-pc.gov.uk

Every year, RoSPA undertakes a formal safety-check, to ensure that the Recreation Field’s  playground equipment is safe for your children to play on. We also conduct regular visual inspections. As soon as something requires repair or replacement, the PC will take the item out of use and then arrange for proper repairs to be made. Petty vandalism (especially to the perimeter fence) is, unfortunately, a regular occurrence and it’s your money we have to use to repair it. If you should happen to notice anything amiss with the equipment, please contact us ASAP, so that we may remedy the situation. You may have noticed that we have removed the baby swings, as one of their supporting posts is rotten and requires replacement. Once that’s done, we’ll reinstate the swings.

The annual RoSPA and the latest PC safety-checks are below:

Each month, we receive a report produced by Laura Miller and Peter Wharf, the current Dorset Councillors for West Purbeck, which provides all the latest County Council news.

Click on the link below to read the latest report:

Each Quarter, Citizens Advice produce a quarterly report, outlining extant issues and what help is currently available to deal with them. You can read the latest report below.